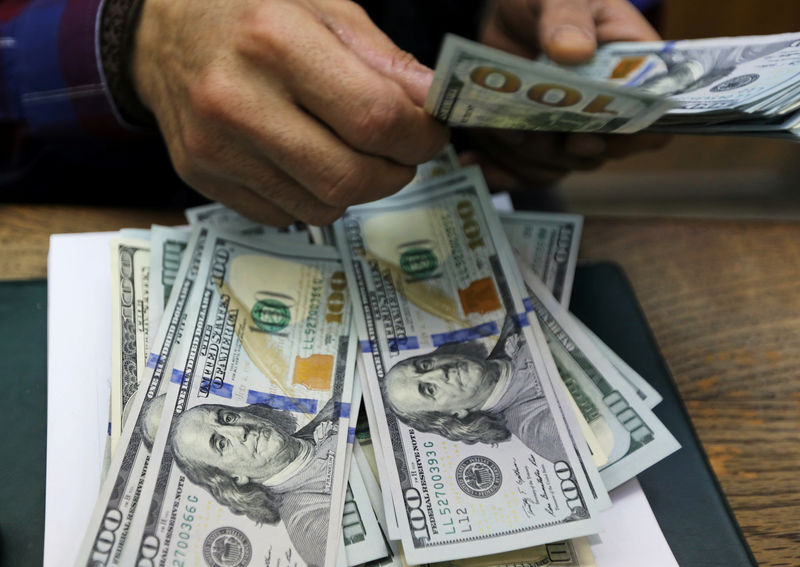 TOKYO (Reuters) – The dollar held firm on Monday, staying near a two-month high against a basket of currencies after better-than-expected U.S. GDP data last week boosted its yield attraction against rival currencies.

The U.S. Federal Reserve is widely expected to cut interest rates for the first time in more than a decade this week, but such a move is being widely seen as a pre-emptive one to protect the economy from global uncertainties and trade pressures.

“What everyone is interested in right now is whether the U.S. will enter a full rate-cut cycle. The GDP figures were a bit stronger than expected, putting a dent to the view of the U.S. entering a long easing cycle,” said Kyosuke Suzuki, director of forex at Societe Generale (PA:).

U.S. gross domestic product increased at a 2.1% annualized rate in the second quarter, above forecast of 1.8%, as a surge in consumer spending blunted some of the drag from declining exports and a smaller inventory build.

The data pushed up U.S. bond yields and cemented expectations that the Fed will go for a smaller interest rate cut of 25 basis points, rather than 50 basis points, to 2.0-2.25 percent.

While U.S. money market futures price in a total of almost 75 basis points of cuts by the end of the year to 1.5-1.75 percent, that still leaves the dollar with the highest interest rates among major currencies.

The European Central Bank signaled last week that it is likely to cut interest rates deeper into negative and adopt more easing measures in September to shore up the sagging euro zone economy.

Ahead of the Fed, the Bank of Japan is starting its two-day policy meeting later on Monday.

Market players expect the BOJ to send dovish messages and it could try to put on a semblance of easing by changing its forward guidance but refrain from rate cuts and other major policy moves given its lack of policy ammunition.

The Australian dollar dipped to one-month low of $0.6900 and last stood at $0.69105 following Chinese data on Saturday showing profits earned by the country’s industrial firms contracted in June after a brief gain the previous month.

But Trump on Friday offered a pessimistic view of reaching a trade deal with China, saying Beijing may not sign one before the November 2020 election in hopes a Democrat who will be easier to deal with, will win.

Senior ministers said on Sunday the British government is working on the assumption that the European Union will not renegotiate its Brexit deal and is ramping up preparations to leave the bloc on Oct. 31 without an agreement.

An opinion poll also showed Johnson’s Conservative Party has opened up a 10-point lead over the opposition Labour Party, fuelling speculation that Johnson will call an early election.