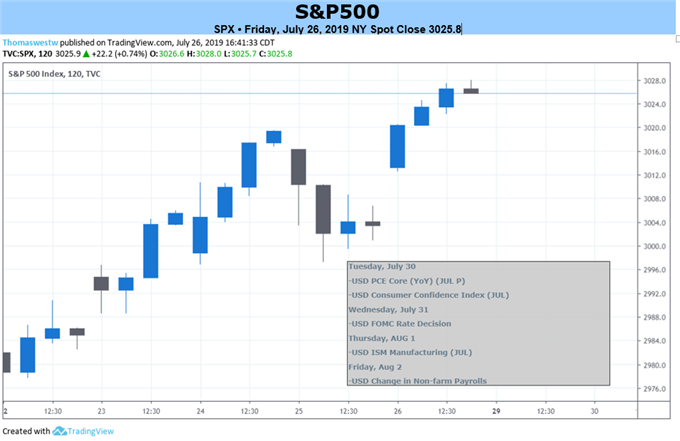 The three large-cap US equity markets will roll into the week near record highs following a string of strong earnings from some of the country’s largest companies. Earnings season will continue next week with the final FAANG member, Apple (AAPL) due to report on Tuesday but even the tech-behemoth will take a back seat to Wednesday’s FOMC meeting. To that end, the Federal Reserve is widely expected to issue a 25-basis point rate cut which will mark the first cut to the Federal Funds rate since 2008. 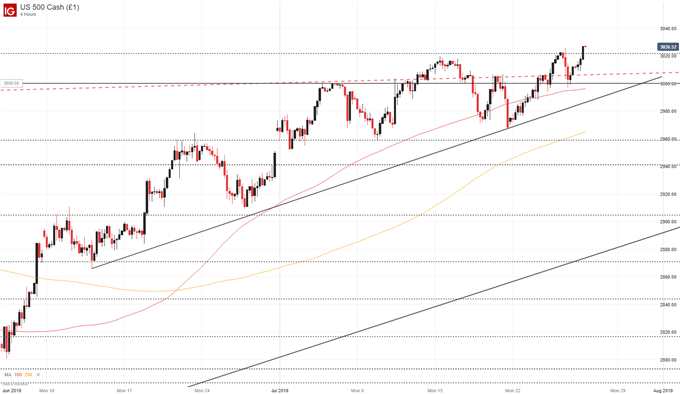 A reduction to the Federal Funds rate would also signal the inception of another monetary easing cycle, which has historically resulted in two fairly distinct trends in the following months. The Fed will also release an updated outlook on the economy. Any indication that the central bank is unlikely to issue further cuts to the Fed funds rate could result in turbulence for the US indices as traders cling to hopes of looser monetary policy to keep the stocks at current valuations.

Shifting focus to Europe, the German DAX 30 has a relatively quiet week ahead. Last week, an ECB meeting that missed market expectations saw the Index plummet beneath support as the central bank signaled easing would occur not at present, but down the line. Given the corresponding reaction in the S&P 500 and other equity markets after the ECB meeting – and their positive correlation – it would be safe to assume the DAX will look closely to the price action of the S&P 500 and FTSE 100 during the week. 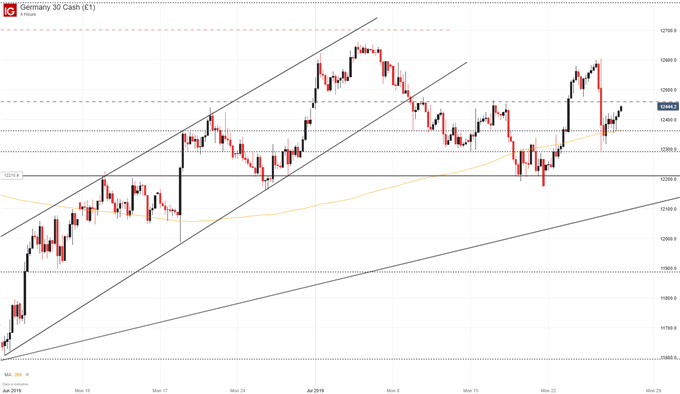 Like the Fed, the Bank of England will decide on its interest rate Thursday. While no change is expected, the meeting will accompany an inflation report and commentary on the domestic economy. With Boris Johnson recently elected as the new UK Prime Minister, the odds of a hard-Brexit have increased, and the British Pound has taken note.

Interested in longer-term trades? Check out our Q3 Forecasts for equities, Gold, oil and more.

With that in mind, the meeting will mark the first official report from the Bank of England under the new Prime Minister and the resultant Brexit situation. Traders will look for remarks on the implications the new Brexit outlook has on the economy. Should the new forecast disappoint, the BOE may express a willingness to pursue accommodative monetary policy alongside the Fed and ECB. 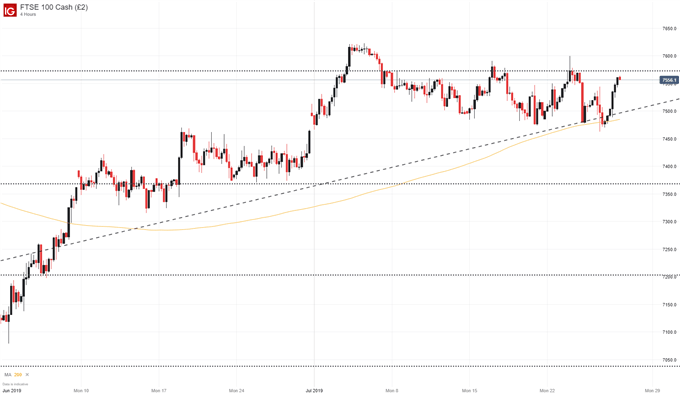 Either way, the loaded economic calendar will look to revive volatility which has been lacking as of late. In addition to earnings and monetary policy, trade wars will remain a headline concern. On Friday, President Trump Tweeted China may wait until the 2020 election has passed to cement a trade deal. He simultaneously threatened to place tariffs on French wine after French President Emmanuel Macron said he would impose new taxes on US tech companies.

While US trade negotiators are scheduled to meet their Chinese counterparts in Beijing this week, President Trump’s comments suggest a trade deal is a long way off and that realization could weigh on equity markets at Monday’s open.

DailyFX forecasts on a variety of currencies such as the US Dollar or the Euro are available from the DailyFX Trading Guides page. If you’re looking to improve your trading approach, check out Traits of Successful Traders. And if you’re looking for an introductory primer to the Forex market, check out our New to FX Guide.